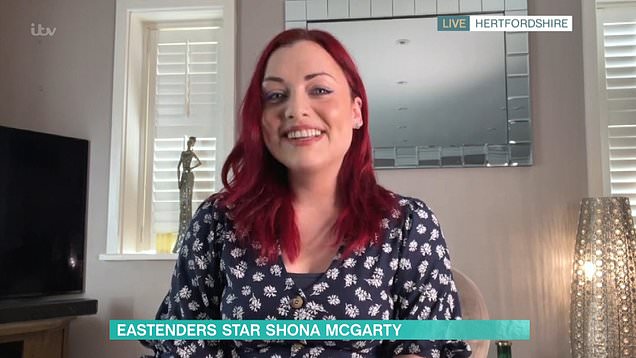 To view this video please enable JavaScript, and consider upgrading to a web browser that supports HTML5 video

EastEnders fans are dying to know what will happen to Kush Kazemi after he stitched up the Mitchells last night.

With actor Davood Ghadami’s exit on the horizon, the pressure’s on for Kush and girlfriend Whitney (Shona McGarty) to fight for their home or flee for a fresh start away from their problems.

But the lovebirds have crossed with the Mitchells – and that’s never a good start when it comes for battling for a place in Albert Square.

Now, speaking on This Morning, Shona has teased whatever’s coming is going to completely change the Walford area – not just for Whitney, but for all of the residents of our favourite soap.

As an excited Alison Hammond begged for information about what’s about to happen to Kush, she asked: ‘Obviously you can’t tell us, but this exit is going to absolutely shake the whole of the square, isn’t it?’

‘Yes, absolutely. I think the viewers are going to be… I won’t to give too much away, but they’re going to be shocked,’ Shona confirmed.

Viewers on This Morning were also given a first look at tonight’s episode, where Kush and Whitney plan to head off together to start a new life.

Will they be able to find happiness together?

It was revealed in 2020 that Davood would be leaving the soap, but over the past few weeks we’ve been shown that the exit is going to be explosive – particularly for the Mitchells.

After being stitched up by the family to take the fall for a number of their crimes, Kush revealed their involvement in the middle of court, vowing not to be used by them anymore.

Phil (Steve McFadden), Ben (Max Bowden) and Shirley (Linda Henry) are promptly arrested in connection with the heist and other crimes – but with twisted lawyer Gray Atkins (Toby Alexander-Smith) on their side, who knows how long they’ll stay banged up for.

If you’ve got a celebrity story, video or pictures get in touch with the Metro.co.uk entertainment team by emailing us celebtips@metro.co.uk calling 020 3615 2145 or by visiting our Submit Stuff page – we’d love to hear from you.

Includes exclusive content, spoilers and interviews before they're seen on the site. Find out more »