INSIDER
Share on FacebookShare Share on TwitterTweet
Claudia Conway, 16, posted two compilation videos on TikTok of what appeared to be her mother, Kellyanne Conway, screaming at her. 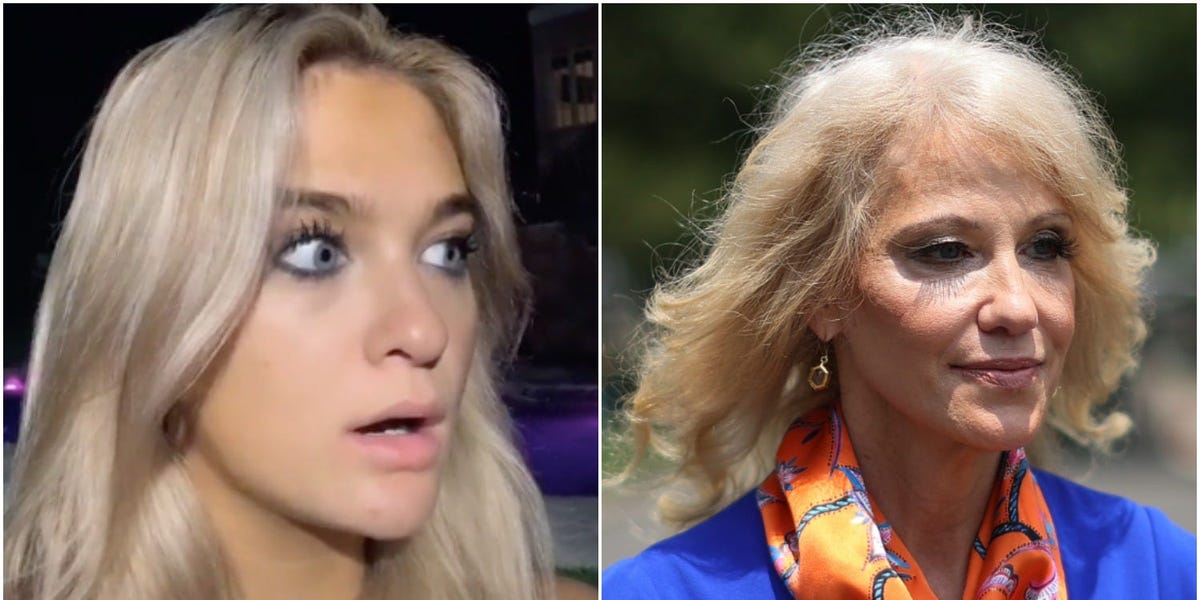 TikTok influencer Claudia Conway, 16, posted two compilation videos on the platform depicting what appear to be tense confrontations with her mother, Kellyanne Conway, who used to be counselor for former president Donald Trump.

The first compilation video, which currently has over 1.5 million views, features text that reads "A COVID recap with Kelly." In the video, a voice that appears to belong to Kellyanne, can be heard cursing at and yelling at Claudia, telling her that she posts lies about her family. In the second video compilation, currently boasting three million views, the voice said, "You're never gonna record another f---ing thing in your life, it's going for a forensic analysis," seemingly referring to Claudia's phone. Claudia is also seemingly being swiped at in the video, asked the person behind the camera to stop.

Some of the videos are seemingly from when Claudia was sick with COVID-19, which she says she got from Kellyanne, who tested positive after attending the Rose Garden Event back in October for Supreme Court Justice Amy Coney Barrett. Kellyanne was photographed maskless along with many others.

After posting the two compilation videos, Claudia followed up with multiple videos attempting to explain the situation. "I want to add a little context to what I just posted," she said in a follow-up video, "I'm not looking to hate on my mom, I just think it's important to tell my side of the story and my experience."

She continued to say, "I was just going through some videos, I have hundreds and hundreds of videos just like that. I thought it was important because as a woman who has such power in this country I don't think people know how she is."

She goes on to say that she's "tried everything" but "nothing can be done because my parents are too powerful." Her father, George Conway, is a founding member of conservative PAC The Lincoln Project, and a vocal critic of former president Trump.

Insider previously reached out to the Child & Family Services Agency to inquire about Conway's past claims of abuse. The agency said it could not comment on the existence of any investigation.

The teen's videos were also met with comments of support and well wishes from her followers. One read, "Claudia, I'm so sorry, I hope you get out of this manipulative and abusive situation. Stay strong." Another comment read, "As a mom, I'm truly disgusted that any 'mom' would talk to their kid like this. You are worthy, loved, and strong. Don't let her or her words define [you]. You're a better person than she'll ever be."

Read more: 15-year-old Claudia Conway broke the news of her mother's COVID-19 diagnosis. Here's how the teenager took over social media, from bashing Trump in TikToks to trolling her parents on Twitter.

Claudia began gaining followers after posting content on TikTok denouncing Trump's actions while her mom was still a White House advisor. Kellyanne resigned from the position in August 2020, saying she was making a decision based on what was best for her children and family.

Insider has reached out to Claudia and Kellyanne Conway for comment, but did not immediately hear back.